To Plank or Not to Plank

The plank can be a great way to work on core function and even postural balance however when done incorrectly, it can actually exacerbate back pain or shoulder pain to make them worse.

Far too frequently people are prescribed planks as a part of their rehab or training program before a proper assessment is performed. The intention of strengthening the core is great, but if you already are experiencing low back pain when your low back goes into extension, it might be further contributing to the problem. That back extension is what tends to happen if there is a relatively weak core to begin with or it will happen as you get fatigued and the low back will begin to sag instead of staying relatively straight.

There are always ways in which you can alter or modify the plank but regardless of how you get set up, you will be supporting a portion of your body weight on your shoulders. This can benefit to strengthen some of the shoulder muscles however, if you have pre-existing shoulder problems, this can lead to further irritation.

Let’s take a look first at some of the main benefits and potential pitfalls of the plank and then look for ways to modify and improve how you do them so you can be safe and efficient.

Strengthens the abdominal muscles: If it didn’t do a good job at strengthening the abdominal muscles, it wouldn’t still exist in the fitness world. When done properly, it works well at activating the transverse abdominal muscle and Obliques, both of which play an important role in core function and low back stability. When someone doesn’t have adequate body awareness of which muscles are contracting or they don’t have adequate control of their muscles,  one common muscle incoordination happens. For people new to working on abdominal muscle exercises, you’ll often see them push out the belly instead of slightly pulling it in or “bracing”. Oftentimes you can work on certain cues to help these people but there are other exercises that can help them learn this type of activation with greater success.

Strengthens the postural muscles: This part gets overlooked by most people but I think this is one of the greatest parts of the exercise because rarely does any other exercise specifically focus on working on the strength and endurance of the postural muscles. They need to work at holding us upright for long periods of time so it’s important to incorporate them. There is a balance between the abs and postural muscles during the plank and when they get fatigued, the low back has a tendency to sag. This sagging (spinal extension) can lead to the joints of the low back rubbing together and causing stress and possibly experiencing some pain in the low back. The simple solution is to make sure you stop your plank before you get to that point, however the difficulty with this comes when people force themselves to try to hold it longer because of the false belief that you need to push yourself to absolute failure and fall to the ground before you stop. This couldn’t be farther from the truth. In fact, you’d be much better served doing a shorter hold but making the sure form is good because it will strengthen your muscles without putting you into as much of a “fight or flight” response.

Strengthens the shoulder girdle muscles: By the nature of having to be on your forearms, you’re working the muscles of the shoulder. When done correctly, you can get great activation of the Lat muscles and Serratus muscles which helps to facilitate even better activation of the abdominal muscles. One of the major concerns with the shoulder position is that many people have poor posture with their shoulders rounded forward and this position basically creates even more forward shoulders. There are a few other complications if you have a previous injury to your shoulder but those are so unique to each individual that it’s impossible to cover it in an article. The simple solution is to make sure you have additional exercises to strengthen the back of the shoulders which will help bring them back into a more relaxed position.

So what are some simple things you can do instead or that will help you improve your plank? I’m glad you asked.

Here is a useful awareness exercise/drill along with a plank alternative that is useful for beginners all the way up to elite athletes.

When it comes to strengthening the abdominal muscles, the debate as to which exercise is the best and does the most for you, is pretty much endless. Instead of going there, let’s look at a way that you can simply build awareness and learn how to transfer that into the plank. A standing version of the Plank is a simple way to engage almost all of the same muscles as the plank but without needing to worry about your back sagging if you experience fatigue. This is mainly an awareness drill but can certainly be used to strengthen your core. 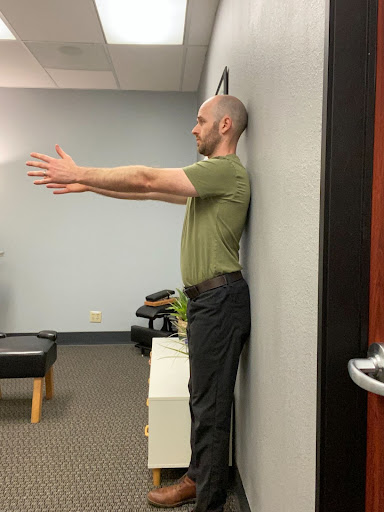 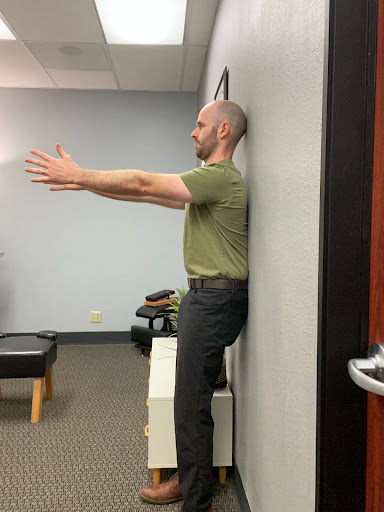 a. Because this exercise/drill is “self limiting” , meaning that you can make it more or less difficult based on how much you contact your muscles, it’s great for building phenomenal mind-body awareness.

b. Think about this as you’re exhaling, tuning into different parts of your body. From your feet and calf muscles, up to your posture, arms and hands. The more intense you contract your muscles, the greater the sensation of relaxation and decreased tension you’ll experience once you finish the drill.

To get you Familiar with the plank and expose you to less stress on the low back, doing a plank on your knees  instead of toes/feet is a great alternative. With this particular setup, you can really work on the endurance of the muscles and the intricacies of breathing and head/neck position, which are some of the benefits of the plank that often get missed in the discussions as they mainly focus on core function or ab muscles. 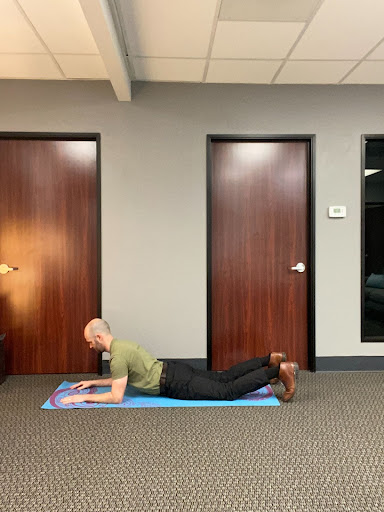 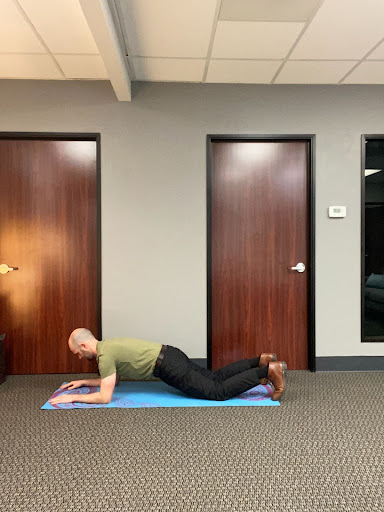 a. Start off with your elbows under your shoulders in order to push your upper body off the ground. Actively pull your shoulders down away from your ears to engage the lat muscles. This helps enhance the abdominal muscle contraction as well.

b. Tuck the pelvis the same way you did to flatten your low back against the wall. This helps keep your lumbar spine from overextending. Keeping the pelvis tucked and your knees and feet on the ground, raise your belly, pelvis, and upper thighs off the floor.

With plenty of practice of this version of the plank, you can get a tremendous amount of positive benefit. It will certainly help and carryover into the standard plank when you feel like you’re ready for it. As stated previously, there are a myriad of alternatives such as the bird-dog exercise and all its variations and they may be needed based on what your body can handle. So if you have an injury and these aren’t comfortable for you, send me a message or find a trainer that can help you modify what you’re looking to accomplish so you can get the most out of your efforts.

To lower the risk of having the Lumbar spine sag during your plank, building up some endurance with and ‘hold’ can help tremendously. With this exercise, the goal is not to lift your chest off the floor as high as possible but rather to stay low, breath into your belly and work on the duration or endurance of the muscles. 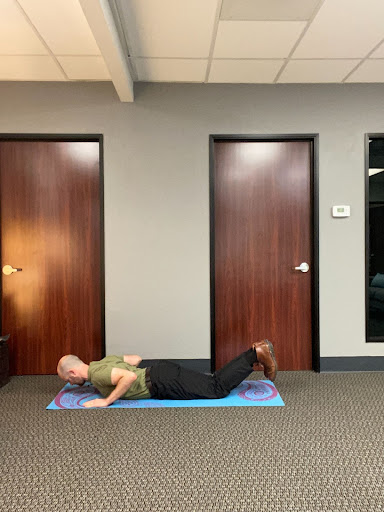 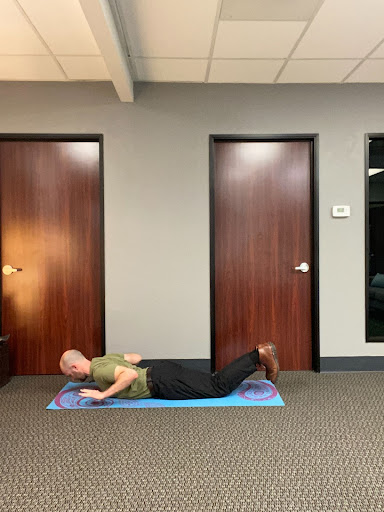 a. Start lying face down, chin slightly tucked and pulling your head back.
1. Even this starting position is great for working on correcting forward head posture.

b.Place your hands at shoulder level and keep your elbows close to the body and shoulders actively pulling down away from your ears.

c. Keeping your knees on the ground, squeeze them together and lift the feet 4-6” off the ground.

d. Press into the ground slightly with your hands to elevate your upper body 2-3” off the floor.

e. Hold this position and continuously check to make sure you are maintaining the key points of head/shoulder position, knees/feet squeezed together, and you’re breathing into the belly.

As you can see, and experience if you wish, the plank has many moving parts, even though you don’t move while you’re performing it. Of course there are way more variations and add-ons but here is a simple starting point. Enjoy getting stronger!